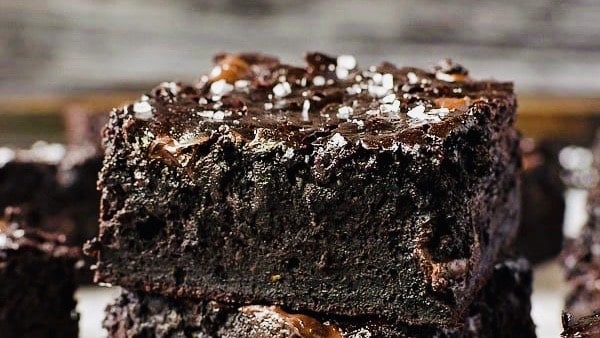 These zucchini brownie recipes are healthy and perfectly delicious. They’re a great option for keto and low carb dieters who still want a sweet treat.

If you are on a keto or low carb diet, you know how hard it can be to resist eating desserts.  But rest assured, we don’t want you to miss out on having some sweet treats that won’t be bad for you.  That’s why we’ve found these healthy and tasty zucchini brownie recipes.

These brownies are so delicious but are made with zucchini as the main ingredient.  This is going to be the reason that people on a keto or low carb diet can eat them.  These zucchini brownie recipes are simple to make as well.

So if you’ve been looking for a tasty brownie recipe that won’t impact the diet that you’re on, these are going to be some great zucchini brownie recipes for you to try out.

You’ll never guess that these chocolate chip zucchini brownies are actually made with zucchini.  They’re just so perfect and gooey and moist…truly a perfect healthy dessert option!

The name of this brownie recipe may be a long one, but the end product is truly spectacular.  The peanut butter and zucchini make this a healthy sweet treat that you’ll enjoy!

These brownies turn out so fudgy and scrumptious.  The gooey peanut butter frosting that gets smeared on top of them takes it to a whole other world of flavor!

What makes these zucchini brownies so delicious but also so healthy?  It’s the almond flour, chocolate chips, and the maple syrup.  Perfect for those who are looking for a paleo and gluten free dessert option.

These brownies turn out so fudgey and filled with a ooey gooey texture.  The almond flour and zucchini help make them healthy and not bad for you.  Paleo, keto, and gluten free friendly.

When you bite into these brownies, you won’t believe that they were made with zucchini.  The dark chocolate flavor is the stand out and the texture is sweet and soft brownie perfection.

If you’re new to making zucchini brownies, then this recipe will be the one you should try first.  The step by step video makes learning how to make these brownies super simple.  You’ll love the final product!

These zucchini brownies are secretly healthy.  They will total only 87 calories per brownies, so you won’t feel too guilty if you have more than one.  We won’t tell anyone if you do 🙂

This recipe for these vegan and gluten free zucchini brownies are simple to make.  The final product is going to be a gooey, chocolaty, and delicious healthy brownie.

Nobody is going to know that you made these brownies with zucchini.  They’re super moist and full of chocolate flavor.  What a perfect and healthy dessert recipe for you to make.