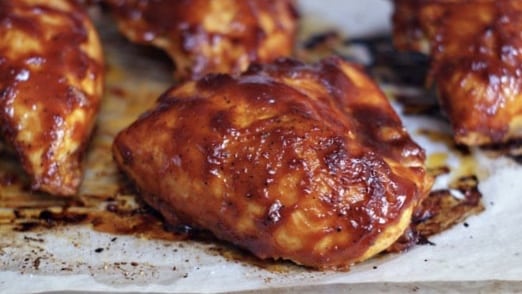 The summer time is the best time for BBQ chicken.   These recipes will be a huge hit at your next outdoor party of family dinner!

The summertime is perfect for some good food. A lot of that comes around cookouts and barbecue. And one of the best things to make on the barbecue is some chicken!

Making barbecue chicken really isn’t that hard. What really separates you from other people is the spices and seasoning that you use.

We found 14 different barbecue chicken recipes that were sure that you’re going to find awesome. Everyone is a little bit different in the other so just find the one that your family loves best.???

This barbecue chicken recipe is full of flavor. Because it’s baked, it’s gonna come out moist, tender, and delicious.?

This baked barbecue honey chicken is so good. It’s because it’s easy to make and the flavor is phenomenal. It’s sticky and saucy and because it’s baked – no frying needed. ? ?

Bake this barbecue chicken in the oven and you’re gonna love the result. It comes out super moist and everyone’s mouth will be watering when they bite into it!?

Step up the flavor with your plain old barbecue grilled chicken. This recipe only takes three ingredients including the chicken. It’s going to taste super awesome with the ranch marinade packet that you are using.?

This barbecue dish is going to impress the neighbors. They’re going to want you to make this over and over again. The bourbon bacon flavor is undeniable!?

These kebabs are so tender and juicy. They are spiced rub barbecue chicken placed on skewers. The barbecue sauce is sweet and tangy!?

You’ll make this oven barbecue chicken because it’s super simple and easy. It’s finger licking good and any home barbecue chef can make this. Did we mention that that has a no cook barbecue sauce as well??

You can make this grilled barbecue chicken if you’re short on time. It doesn’t require a marinade so it’s easy if you need a quick last-minute meal.?

10.  How to Make the Best Baked BBQ Chicken

The baked barbecue chicken meal is a classic American dinner. This recipe has crisp skin and a barbecue sauce that actually stays put. It’s going to be made and your family is going to be licking their fingers when they’re finished.?

These simple chicken bites are the perfect weeknight meals. They’re covered in honey which makes it a sweet and savory meal that you can have on game day with your friends.?

Finish off a delicious slow cooked barbecue chicken meal with this Tangi and sweet barbecue sauce. It’s by far one of the easiest and quickest recipes to make it home.

There’s so many delicious oven baked barbecue chicken recipes. This one is no different. It’s going to finish off with being perfectly juicy inside. You’ll smother it with barbecue sauce at the end for a tasty meal!?