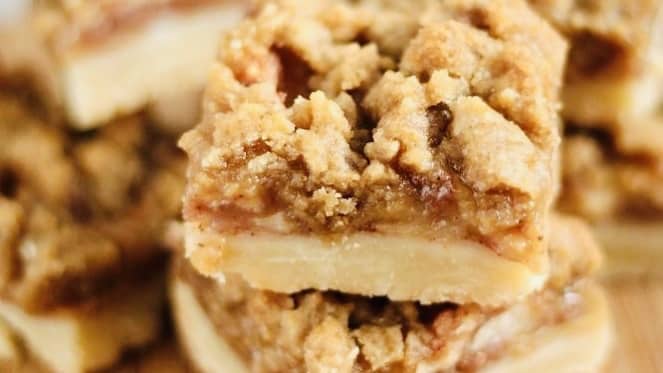 Enjoy these apple desserts that are perfect for Thanksgiving. Find the perfect one for you – from apple fritters to apple cinnamon rolls!

The crisp is in the air and the apples are in full bloom. It must be fall!  Can there be anything better then some delicious apple desserts for Thanksgiving time?>

Trust us when we say, we’ve found 25 very cool, tasty, and perfect apples desserts.  If you’re a fan of apple fritters, apple pie bars, or maybe even apple pie roll-ups (totally delicious)…you’re going to love the selection we’ve found for you!

So bundle up and get out your notepad.  Take down a list of the best apple desserts that you’d want to make for Thanksgiving time.  Make sure that you make enough for your guests to bring home leftovers though!

Comment below and let us know what were your favorites!

Warm and crispy are how we can describe these apple pie roll ups.  You’ll be having these ready to eat for breakfast or a dessert in just 20 minutes!

This crumble topped apple crisp is perfect for a fall dessert.  You can use any type of apple that you want since it can be modified to your liking.

Just blend together a caramel apple and a cheesecake and you’ll have this dessert.  It’s a delicious creamy cheesecake topped with apples – you’ll absolutely love this sweet treat!

You’ll have a new Thanksgiving dessert when you give these a taste.  Don’t worry about serving cake or apple pie – try this blended apple pie cake dessert!

Apple crisp shortbread bars are so sweet and savory.  Simple bite sized desserts that are great for a work party or other special event.

With some chopped apples and a brown sugar cinnamon swirl – you’re going to be on your way to a delicious recipe.  This cinnamon apple bread is going to be a hit and a perfect dessert to make during fall!

These crescent rolls are going to get stuffed with apple, cinnamon sugar and ready for this…Mountain Dew!  You read that right, but don’t get fooled by the ingredients – it turns out absolutely delicious!

Can there be a better dessert for Autumn?!  Check out this recipe for apple blondies!  Pair it together with a delicious scoop of vanilla ice cream.

Enjoy these apple pie cinnamon rolls at your Thanksgiving day.  It’s a perfect dessert to serve after your delicious meal.  You’ll enjoy the combination of the cinnamon and apple flavors.

If it’s fall time then you know its apple time!  This cinnamon apple crumb cake is a great dessert that you can make for a delicious fall time dessert.

Enjoy the moist and caramel frosted apple cake.  It’s just heavenly with every bite that you take.

The thick slices of the Fuji apples is the foundation for this apple dessert.  The chocolate turtle apple slice dessert is covered with melted chocolate and caramel drizzle and then then topped with nuts!

A truly simple and moist cake that is covered with a creamy apple cider glaze.  It’s going to be a hard dessert to top when you serve it this fall.

Looking for a sweet treat for breakfast?  This apple pie monkey bread will be the perfect answer.  You’ll enjoy the combo of apples, cinnamon, and some tender biscuit pieces.

If you’ve been looking for a great dessert to serve after Thanksgiving then this is the one!  These caramel apple crisp cheesecake bars will be perfect for the fall and during other holiday parties.

The apple pie bars are such a hit during the Autumn season.  Apples are in full force and they create delicious reicpes.  This is going to be no different!

If you love caramel apples then you’ll just love this apple pie recipe.  You’ll be eating this with some soft and chewy apple spiced oatmeal cookies.  What a great fall dessert!

Imagine drinking a cup of coffee in the morning and taking a bite of a homemade donut.  These apple pie donuts are going to be a huge hit.  What a way to start the morning!

Take some chunks of apples, cinnamon, and donut mix to start.  That’s all you really need though!  Enjoy these easy apple fritters at breakfast or for a snack!

Think of this as an apple pie but without using the pan.  Thin sliced apples are baked on top of a flaky and butter crust.  What a nice spin on the apple pie!

What a great finger food dessert.  Use store bought pie crust and cut it into strips.  These apple pie fries are a easy and simple spin on an apple pie!

Fall desserts are always the best type of thanksgiving desserts.  These peanut butter cookies are no different.  The cinnamon and diced apples go so well together with the cookies!

This is eating apple crisp in the form of a cookie!  Enjoy the apple oatmeal cookies that turn out chewy, delicious, and filled with apple cinnamon flavor.

24. Appledoodles (Snickerdoodles with an Apple Twist)

Appledoodles are a fun little twist to the snickerdoodle cookie.  You’ll be able to use up any apples that you’ve picked and have left over!

Throw a perfect scoop of vanilla ice cream on this apple crisp dessert.  There won’t be a better way to finish off a Thanksgiving meal.  A truly excellent apple dessert!